It. Had. To. Be. You.
Wonderful You.
It haaaaaaad to be yooooouuuu….
The year was 1991.  I was a sophomore at Portland State University.  I had quite an obsession with anything Harry Connick Jr.   I thought it was the coolest that someone so damn dashing from my generation could bridge the 50 year gap between my grandmother & I.  Something special about singing along to some of the Big Band Classics together that makes for some of my favorite gramma memories. (Thank you When Harry Met Sally!)  I was 19 and I believed anything was possible (Still do actually, 22 years later).

I was scanning  radio stations on a stormy morning commute when I stopped on Q105. They were hosting a contest.   A “Meet Harry Connick Jr.  and have lunch with him” contest!   OH MA GAWD!! This was MY chance.  The catch: I  had to sing “It Had to Be You” on the air, live.  And then it was completely up to the listening public to call in and vote on their favorite rendition.  Hmmm, my incomplete vocal lessons might get in the way between me  and my favorite Southern crooner.  So I began to practice.  I sang and sang and sang some more until I felt I hit every note just so.  I was beyond Girl Scout prepared for my chance to call in and give it my best shot the next morning. 4 a.m. and I’m woken up with panic riddled thoughts, “You can’t just sing the song!  You have to make it different.  But how?  The challenge is to sing “It Had to Be You”.  How can I stray from that?  Humor.  Inject it with humor.  Yes, that’s it.  Make people laugh and you’ve broken through to the next level.”   And so I morphed my perfectly crafted classic into a cheesy ballad, highlighting the radio station sponsoring the contest (flattery gets you everywhere!) and crossed my fingers that the city of Portland would validate my inner comedian, especially since I wasn’t so sure my inner singer would take me very far.  Well, it worked.  68 early morning callers made the effort to call in and vote for ME! What did this mean?  Besides changing everything and confirming that anything is possible?  It meant that Halloween of 1991 was the best day EVER.   It meant that I got to break bread with Harry (cue window opening for an opportunity of “sweeping him off his feet”).  It meant that my seats were upgraded to front and center.   It meant that dreams really do come true.  Lunch was at the Heathman Pub in Downtown Portland.  My nerves were out of control as the minutes between meeting the man of my dreams were diminishing.   Big hair? Check.  Shoulder pads?  Check.  (It WAS 1991 folks.  Those things really were the style back then.)  I walked into the room where Harry & I were to enjoy one another’s company for an hour only to discover that his 16 piece band had tagged along, along with about what seemed to be 30 people from the radio station, and another set of radio winners (Hi Laura! Hi Lorna!).   Oh yah, and Harry’s girlfriend, Jill.   The drop-dead gorgeous Victoria Secret supermodel, Jill Goodacre?  Yah, that Jill.  Well hell.   Master Plan “Swoop”,  scratched.  I had to quickly gain my composure and go to Plan B; get over myself and enjoy this surreal moment immensely.

As I took my seat opposite Jill (this in and of itself was amazing!), we engaged in small talk as Harry worked the room.  Totally not how I had envisioned this unfolding at all but when in Rome…
Jill:  How are you here?
Me: Um, I sang on the radio and won a contest.
Jill:  Really?
Me:  I know.  Kinda crazy isn’t it?  (Picking at my salmon wondering where were my BIG GIRL words?  Geez!)

About this time, Harry comes back to the table to check in on his lady to see if she needs anything, “Daarlin’, can I get you sum caawfee?”   Jill butts right in and exclaims, “Harry, this girl sang to get here!”  Harry looks at me and says, “Well I ain’t leaving this room til y’all sang!”

Awkward silence.  Dramatic pause.  Deer in headlights.  Swoon.  Then panic.  It felt like all the blood had drained out of my body and I was going to simultaneously puke and pass out.   All at the thought of singing in front of Harry.  Wasn’t this what I had wanted?  Yes, yes it was.  PULL IT TOGETHER man!  And so I did. 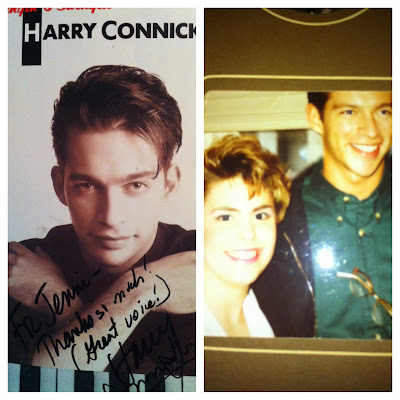